This article starts with the conclusion of a few lines drawn on a piece of paper, a simple representation of what I had in mind. I knew that the two drawn sigmoids were the answer to what I wanted to express. It's not that it was saying anything new, these curves have been out there for ages, it's just that much information could be extracted from those 2 curves.

I have not tested using historical data to validate that indeed the 2 sigmoids were good representations. It's just that if I did find a solution to what I was looking for, it think it would turn out to look like those 2 curves. At least, that is how they appear if you use randomly generated price series.

So let's jump right in. The chart below shows the composition of a stochastic differential equation (SDE) when applied as a model to long-term trading from the point of view of an expanding trading window viewed from its end point. That was complicated. Anyway, the chart looks like this: 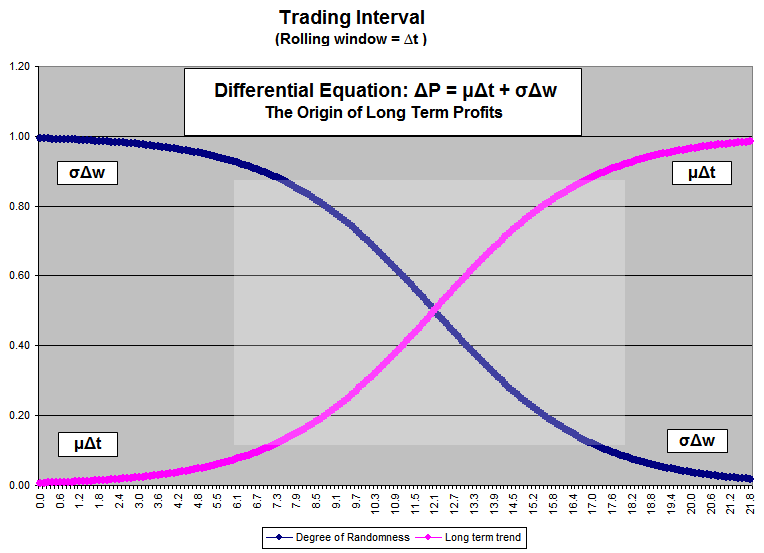 The chart's composition is from a stochastic differential equation (SDE): ΔP = μΔt + σΔw with drift (μΔt), random component (σΔw), and where w is a Wiener process. Most often, ΔP will be expressed in relation to Δt as Δt → 0. Thereby providing close to the instantaneous change. However, here the study will be to show the impact of looking at the problem from the angle of Δt → T: the long-term time horizon from small Δt, to larger Δt, up to ΔT itself.

The first curve representing the drift (μΔt) is simply the long-term trend, the average rate of return over the investment period. In the beginning, it has little impact when looked from a 20 years perspective. This is quite reasonable, say you have a $100 stock proxy with a long-term rate of return of 10% dividends included (average secular trend). So, on the first year it is expected to gain $10.00; on a daily basis, this amounts to $0.0274, an increase of almost 3 cents a day. Therefore, the initial contribution to the long-term trend is minimal. For instance, IBM over a 13 year period had an average daily standard deviation of $1.89 where only $0.0274 could be attributed to its long-term trend.

The drift's contribution (μΔt) is seen increasing as Δt increases and approaches ΔT; slowly at first due to the minimal contribution to the long trend and thereafter expanding to represent more and more of the underlying explanation for the price movement.

The above chart is designed so that as Δt increases to ΔT, we can see the contribution of the random and drift components of the SDE from the trading horizon T. So let's start with the first curve: μΔt (the trend). Over time, this is just a linear regression giving μ the average rate of return. In the stock market, μΔt is more an exponential function: (1+μ)^t.

By expanding Δt to ΔT, the long-term trend will be more evidently prominent to finally approach 1 asymptotically as we approach ΔT. Thereby, the long-term trend is more representative for the majority of the overall price movement. It becomes more understandable when you see someone like Mr. Buffett looking only for large ΔTs. Just as he said in his last newsletter to his shareholders: "you are almost guaranteed to win".

Since the SDE equation does not change as model representation over the time interval, there are not that many choices left. If μΔt (the long-term trend) is viewed as in the above chart. This would mean that the random component σΔw would have to take the form as shown in the chart. In the beginning, it becomes the factor that dominates the price movements. And with time transition to a much less significant role. As in the IBM example, in the beginning, one standard deviation was $1.89 while the drift was only $0.0274. And if one wanted to consider 2 standard deviations: it would be $2.78 compared to $0.0274 since the drift would not change.

Over the long term, the SDE: ΔP = μΔt + σΔw should tend to ΔP = μΔt since σΔw → 0 as is the error term of a linear regression. It's exactly what is seen on the above chart.

There is much to learn from such a chart. For example, if you increase your trading interval to include long term, you are almost assured to win just by following the trend. This is why a long-term Buy & Hold or buying index funds so often comes ahead over active trading.

The task then becomes finding trading strategies that will comply with the above chart, and understand that even if the model does not change over the trading interval: ΔP = μΔt + σΔw, your trading behavior should.